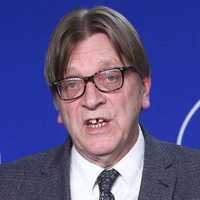 Guy Verhofstadt is a Belgian politician with a long and decorated career. In 1985 he served as Belgium’s Deputy Prime Minister, before serving as Prime Minister from 1999 until 2008. After he left office, Verhofstadt was elected to the European Parliament where he was group leader of the Liberals and Democrats from 2009 until 2019. He still sits in the European Parliament today, where he is a champion for European integration. His latest book is entitled Europe’s Last Chance.